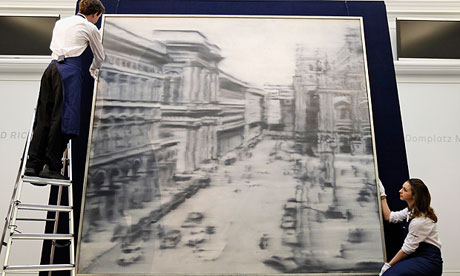 An enormous Gerhard Richter painting of Milan's Piazza del Duomo (Cathedral Square) that was commissioned to cheer up the offices of the electronics conglomerate Siemens sold for $37m (£24m) on Tuesday, setting a new auction record for a living artist.

At almost 3 metres by 3 metres, Domplatz, Mailand from 1968 is one of the German artist's biggest works and, with its look of a fuzzy black-and-white photograph, is instantly recognisable as Richter.

It was bought by a Napa Valley vineyard owner, Donald Bryant, who punched his fist in the air after successfully buying the Richter at Sotheby's big contemporary art sale in New York. The work "just knocks me over", he said, although when told it was the most ever paid for a Richter he laughed: "I'm not sure I should be breaking those kinds of records."

The Milan painting was sold by the Hyatt hotel group – it hung in Chicago – achieving a price 10 times higher than they paid for it in 1998.

Richter, subject of a major retrospective at Tate Modern in 2011, already held the living artist record after Eric Clapton sold Richter's Abstraktes Bild for £21.3m in London in 2012.

It was a mixed, difficult-to-read evening at the sale. On the one hand there were some eye-spinning amounts paid, not least the $43.8m for a monumental deep-blue abstract painting – Onement VI by Barnett Newman – sold by Microsoft co-founder Paul Allen, setting a new record for the artist.

But a Francis Bacon portrait of his violent lover Peter Lacy, estimated at $30-$40m, failed to sell and there was not a single bid for a Jeff Koons work, New Hoover Celebrity IV – four vacuum cleaners in a glass case. "Tonight was not the night of the Hoovers," said the auctioneer, Tobias Meyer, afterwards.
Publicado por aavibdia 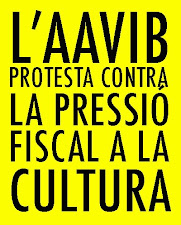